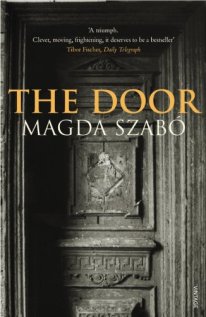 A young writer, struggling for success, employs an elderly woman called Emerence to be her housekeeper.
From their first encounter it is clear that Emerence is no ordinary maid. Although everyone in the neighbourhood knows and respects her, no one knows anything about her private life or has ever crossed her threshold. Only a great drama in the writer’s life prompts Emerence to unveil glimpses of her traumatic past – a past which sheds light on her peculiar behaviour.
The Door brilliantly evokes the development of the bond between these two very different women, and the tragic ending to their relationship.

I can understand that some readers are impermeable to the deep significance of Magda Szabo’s masterpiece, The Door. From several reviews I’ve read on Goodreads, one finds it difficult to fathom what holds together the peculiar relationship between the two woman characters : Magdushka, the writer married to another writer who needs a housekeeper, the childless and motherless intellectual, lacking at times emotional maturity; and Emerence, the sour-tempered house cleaner employed by Magdushka, the caretaker of the block of flats opposite the writer’s appartment, feared by everyone but nevertheless indispensable to everybody in the street, the infatigable worker, hostile to all ideology, with no education but with a keen intellect, two decades older than her employer but just as childless and who’s never married.

Why does Magdushka stick to Emerence at the expense of the latter’s rudeness and verbal abuse? Emerence who comes at no hours to do the housecleaning though with impeccable results. The housekeeper even “steals” the couple’s dog in a way: Viola, the dog, named as such by Emerence, lives with them but only Emerence is his master (to the extent that the dog accepts the occasional beating without whining). Why doesn’t Magdushka set a final point to all this and get herself another house domestic, malleable and docile?
Well, there is a secret that cannot be explained: what draws two persons to each other that ends up in a trusted friendship even though one has to suffer vexations from the other? You have to read this book in order to grasp the essence of this uncommon friendship without being deterred by Emerence‘s out-of-the-blue reactions or cold indifference. And what about the door? Well, what’s behind the door is central to the bond between these two women.

The Door is a beautiful novel about hard-gained love and what is attached to it: the perpetual need for redemption, the learning pathway to trust, the looming danger of betrayal; love as source of pain.
There is the love between these two women that everything seems to oppose, but also the one between man and wife; the faithful love between the dog and his humans; the caring love for the elderly by the younger and the disillusioned one the other way round; the love for one’s community.

Anyway, isn’t love the core of all existence?

An absolute all-time favourite, a masterpiece:
a rating of 5/5 and beyond.

A buddy reading with Jostein

Read in April 2017 within the reading challenge Objectif PAL