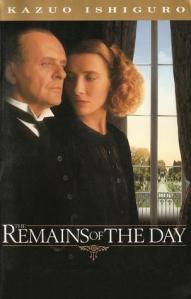 In 1956, Stevens, a long-serving butler at Darlington Hall, decides to take a motoring trip through the West Country. The six-day excursion becomes a journey into the past of Stevens and England, a past that takes in fascism, two world wars, and an unrealised love between the butler and his housekeeper. Ishiguro’s dazzling novel is a sad and humorous love story, a meditation on the condition of modern man, and an elegy for England at a time of acute change.

At last I’ve read The Remains of the Day. It’s been on my to-be-read list for ever and I’m so glad that it has now shifted on my “read” list.
As many readers of the book, I’ve seen the movie first. I was in my early twenties when it hit the theaters and I was in awe of both Hopkins’ and Thompson’s fine art of acting (I start to speak like Stevens, the butler character performed by Anthony Hopkins on screen). At that time, being still at the dawn of my life journey and lacking reasonable life experience, I just could not come to terms with Stevens’ apathy on all levels: how could he not see the love in Miss Kenton’s eyes (the housekeeper character played by Emma Thompson), how could he not understand what was going on during those State-classified meetings the drawing room at Darlington Hall? “Stevens! Do something, say something! Ah, what a coward you are!” Basically that was it and I loved the movie.
Twenty years later, it’s a whole different story. The afternoon in my life journey has already set in. I’m not in the evening yet, no reason to speak about what remains of my day. Yet. But watching the movie for a second time has profoundly disturbed me. Am I sure I have not wasted my life? Looking back at the last twenty years that have gone by and, no, it is fine, nothing’s wasted. Almost nothing. I do acknowledge very dark years that took the form of a somber pitfall on my life tracks. That’s life with ups and downs. I believe the most important feature in life is revolt by not accepting statu quo of uneasy situations, that’s the least one can do. And if hell breaks loose, the only option left to us, humans with a conscience, is to fight back. Fight for our values of love, freedom, equality, respect, right to live a dignified life. What is human dignity? Where does it reside in? The question that Stevens asks himself is “has retained his dignity all this time”? I cannot say about Stevens because I have no right to be judgemental of how he has led his life but I do know about me. And that’s enough.

Read the book. Re-read it. Watch the movie. Watch it again.

2 thoughts on “The Remains of the Day – Kazuo Ishiguro”